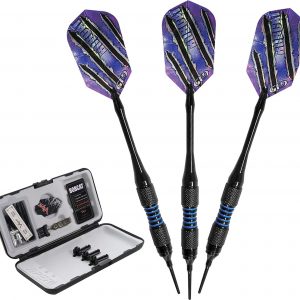 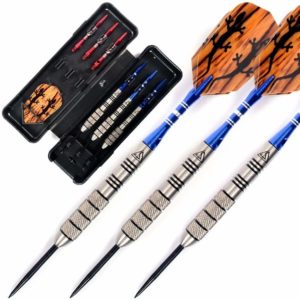 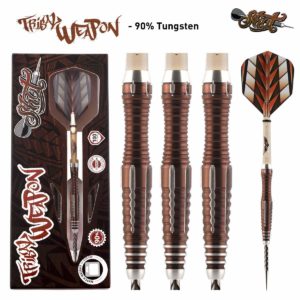 If you have even a mere knowledge of the darts game, you will understand how much care and detail is required when you are going to purchase the best darts set.

There are a lot of variations available in the market, the number is so high that it can actually confuse you. For instance, there are darts with different barrel styles, designs, different weights, different flight paths, steel tip or soft tip and much more.

But one of the most common and important specification, that has a huge impact on how you achieve your scores in the darts game is whether front weighted darts or rear weighted darts. The balance of the dart and the way you throw darts it greatly depends on this characteristic of the darts.

This article will help you choose the best rear weighted darts to buy in 2020 but before we dive into that, it’s important to give you a general specifications intro about the darts to make things much easier for you. 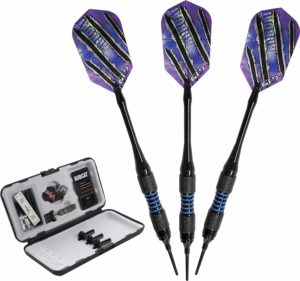 Viper, yet another reputable name in the darts industry.

Viper was started by GLD group back in 1981 and since then, it’s the pioneer of making quality and long lasting darts.

These darts by Viper are actually factory designed to be front weighted but the amazing fact is that they are adjusted and you can vary their weight according to your own desires, rear weighted in this case.

It has aluminum shafts and 2BA shifts and 2-D glitter flights.

A deluxe dart pal case is also included that gives a premium looking to your dart inventory plus a good space to showcase and store your darts when idol.

You have the option to purchase the darts in black, blue, purple and tea rings. The add-a gram system helps your versatile your darts set. Each dart can be adjusted from 16-19 grams.

The darts have knurled and ringed grips, high-speed slim flights, and aluminum locking hole shafts, these shafts allow a more locking fit to your barrel so you won’t have to retighten them after a shot or two.

Each dart is finished off with a bold bobcat design for a deadly look and the barrels includes knurled bands and hand painted rings enabling you to have a consistent and tight approach on the dart throw after throw.

Check Price
Cuesoul is another reputable brand when it comes to purchasing high-quality darts.
These 30-gram tungsten steel tip darts are really a gist of what you will love in high quality and durable darts. They have tungsten made barrels and are rear weighted for easier controlling and great flight.

One of the amazing facts, as mentioned earlier, is the use of tungsten and these are some of the very rare darts available in the market that have up to 95% tungsten metal. The shafts of these Cuesoul steel tip darts are made of aluminum.

The darts also have an additional 11 hand painted knurled grooves and 4 small, stunning knurled barrel grips in front to provide extra tight grip to the players, making sure even the beginners (darts for beginners )  have a great experience playing the darts game.

The package includes 6 anodized aluminum shafts and 6 slim flights for fast-flying darts and enables the tail to stay low.

Unlike most of the darts, Cuesoul has included a beautifully packaged, nice looking carrying case in the package too. This way, you can have your darts showcased in your house and it also keeps the darts safe whenever you are traveling.

ONE80 is constantly setting new standards within this industry to enrich the darts game with better experience and great skills for all level of players.

This professional darts set by ONE80 is rear weighted and 90% tungsten made, making it high quality and resistant to the tough job of wear and tear. The tungsten metal also offers a great slim profile.

Its strategically placed knurled, grooves and rings provide exceptionally tight gripping options without hindering the throw. The fine rings are really great to provide a firm grip over the entire length of the dart.

The dart has high-quality shafts and flights that decrease the air drag on the dart which increases the speed of the dart and makes it much more accurate.

Finding the perfect rear weighted darts for you can always be messy with such a wide variety of options available in the market. 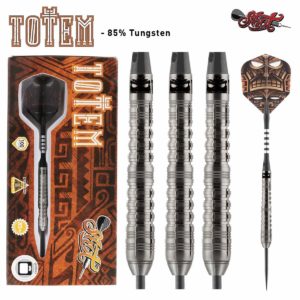 Shot once again makes it to our top five list of best rear weighted darts to purchase in 2020.

This is purely merit-based and no bribes, we swear.

This is a 24-grams tribal inspired dart set. The theme is inspired by ancient tribal textures and traditions. These darts make you feel if you are playing on a beachside in the Caribbean in the 17th century.

The darts are designed both for beginners as well as professionals and support maximum aerodynamics and grouping and is made of 90% tungsten metal which is a sign of reliability and the fact that this dart can take all the wear and tear involved when playing the darts game.

All products of Shot go through a tough 7-step process to make sure that the final form of the darts is the finest production, the highest and the most reliable you can find anywhere in the market.

It includes a hybrid pyramid barrel design and the channel grip offers powerful and positive control.

Finding the perfect rear weighted darts for you can always be messy with such a wide variety of options available in the market.

Shots are the best and most reputable brands when it comes to making darts. Their main focus is always consistency and giving you that edge you require from your companions.

The darts are 24 grams in weight and have a long barrel that is easy to grip for people who have a middle or rear finger throwing style.

The darts Ronin Rei barrel is center weighted with a brick like a masonry grip on the front. In addition to that, the midsection of the barrel is encircled by Gauntlet Grip of a deadly pair of shark fins.

These darts are finished with tough 100 Micron flights which feature distinctive designs that are featured by Shot’s in-house design team. The dart flights are in a standard size that provides maximum lift and stability when the dart is in flight.

The shafts are manufactured from a durable polycarbonate material with a 2BA thread. Shafts are fitted with additional rings to ensure tight fits. These shafts give great balance to the flights and ensure that the dart will hit the board at an optimum angle.

Everyone has its own preferences, throwing and standing styles, hand and wrist size and gripping style when it comes to the darts game.

Even the slightest of changes can have huge impacts on your performance, you can be a hero or a zero within no time. So, its very important that you chose a dart based on your desires and already synced out playing style.

Because without considering your budget, it’s useless to move to further facts.

When discussing darts, you have to be very precise. Its like ‘the more the sweet, the sweeter it is’. Cheap products will be less comfortable, difficult to play with and won’t be reliable. Similarly, a little expensive darts will produce many consistent results and will help you develop great skills for long-term results as well.

If you want to take your game to the next level, you should not hesitate to spend a little extra on a quality darts set because first of all, these darts will be long-lasting and second, you will be developing some quality skills.

The best way to analyze the quality of a dart product is the amount of the tungsten used in it. While the tips of almost all darts are made up of steel, the barrel and shaft of high quality and reliable darts are always made of 80-90% tungsten metal.

Tungsten is a long lasting metal that can withstand the excessive wear and tear involved in the darts game and in addition to that, it is also very easy to grip.

Darts made of steel or aluminum are also available in the market but high-quality darts are always considered the ones with a higher percentage of tungsten because it provides a tough grip in contrary to the slippery texture that aluminum and steel have.

Without any doubts, the steel and aluminum darts are cheap and money savvy but they only damage your game and skills in the long run so, it’s always better to invest a bit more for a good future.

The rules and regulations of the darts game permit you to have darts having a maximum weight of 50 grams but we haven’t seen anyone using the 50-gram ones often.

The average darts range anywhere between 15-30 grams and the majority of the weight comes from barrels which are the part that the player grips while making a throw.

Mostly players like heavier darts because their flight is great and you don’t have to use a lot of arm power to throw them, instead their weight pushes them towards the target. However, if the dart is too heavy, it will require a greater force to throw and will drop easily, missing the targets more often.

Darts with weights 16-19 grams are considered lighter ones and are seen rarely as compared to the darts with weights ranging between 20-28 grams because most players don’t like the lighter darts because of their throw motion and the greater initial force they require.

Mostly, players like to have darts with a 1.5-2 inches long barrel. It’s great for overhand throwers and people who like to be consistent with their style and throwing positions.

However, if you are someone who likes changing their throwing style and position from time to time, in other words, likes versatility, then a longer barrel is what you need because longer barrels help you throw the darts from different positions, styles, and mechanisms.

Steel tips are usually considered for people who are professionals or at least have some experience in the darts game. In addition to that, you must choose a steel-tipped dart that is durable and high quality so it can withstand hundreds upon hundreds of throws.

Steel tipped darts are mostly used with brass or wooden dartboards because they are sharp and hit the surface deep.

If you are someone who is just starting out or someone who wants to play darts just casually with friends and family, then we would recommend you soft tip darts because they can be used with modern dartboards such as magnetic dartboards and electric dartboards and in addition to that they are long lasting and safe to use too.