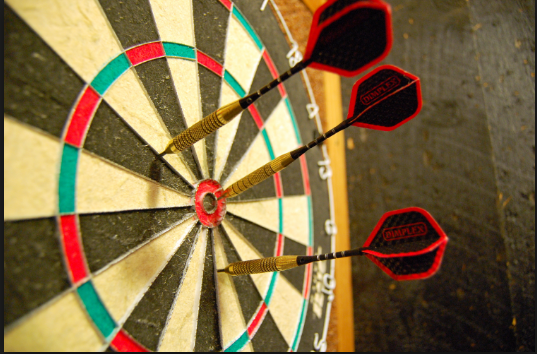 Hello, readers, I am sure that all of us at one or the other have experienced the joy of playing with darts and some of us might have even turned this into a career. Darts and Dartboards have a long rich history behind its development. In this article, I will take you on a journey to explore the birth and development of Dartboards. The Dartboards are regarded as the descendants of archery targets. Before the World War, the Dartboards were made of softwoods such as Elmwood, they were easy to cut and mold. However, these dartboards had two issues the first the short life expectancy and second the soaking of dart boards in water for the purpose of closing the dart holes. As the popularity of the Darts increase so, did the headache of the pub owners. The Nodor a company which was a clay manufacturer decided to seize the opportunity and provide a solution to the headache of the pub owners. They developed a clay Dartboard; however, this product was unable to gain popularity and became an unsuccessful product. However, the Nodor continued to strive for the development of ultimate Dartboard. They eventually succeeded in the construction of Bristle Dartboards. They were made from Sisai plant and as compared to its predecessors had many advantages such as longer life expectancy, better durability and automatic closing of dart holes. However, the company came across another hurdle which was the cost of production. The new Dartboard as compared to its predecessor was much costlier. This problem eventually ended up getting solved when elm wood disease spread and the import of wood was stopped. The Dartboards, in the beginning, did not have number segments instead the tree rings were used as indicators for numbers. Eventually, however, Brian Gamlin introduced the idea of segments. Every era added something new to the development of Dartboards. The wire became thinner, the shape changed and now we see before us the final product of all those efforts. In the contemporary world, different forms of Dart Boards exist such as Electronic Dartboards, Magnetic Dartboards, Bristle Dartboards, and many others. These Dartboards are made from different materials and target a different audience. Let’s take a look at them:-

As already pointed out that Bristle Dartboards are regarded as a proper form of dartboards even after entering into the modern age their popularity remains the same. These were first developed by Nordon here is a fun fact a strange kind of myth got attached with Bristle Dartboards according to which these dartboards were made from horse or pig hairs this is not true. In the history of Dartboard, no board was ever made from animal hairs. The Bristle boards are made from Sisal and follow a specific procedure. So, let’s delve deeper into the procedure, shall we? The first step is the harvesting of Sisal plants after which their skin is cut off and all the moisture of the plant is squeezed out.  Sisal plants are commonly found in Africa however, China, Brazil, and South America are also regarded as its producers. The Sisal plants have to go through a combing process which leads to the development of a thick roll that is cut and is called Biscuits. These biscuits are then pressed into a round shape and a wooden backboard is attached after this the board goes through a sanding process through which any lose sisal strands are removed. The last few steps include spraying the board with color, attaching a number ring and adding wires. In the past 1.6 mm was a fixed measurement for the wires of Bristle Dartboards, however, with recent development, it became clear that thinner wires were better as they decreased the bounce rate of the darts from the board. The Bristle Dartboards accommodate people of all skill levels whether you are a beginner or a professional a good Bristle Dartboard can help develop your skills a long way.

Darts might seem fun but they have sharp tips which increase the risk of accidental injuries or other wounds especially among children to deal with this situation a new kind of board was introduced which is called Magnetic Dartboard. The darts for these boards are not sharp they make use of small magnetized tips. Some Magnetic Dartboards have a metal plating attach to them this, however, has a negative impact such as loud noise. So, each time you throw a dart you will hear a loud noise that will probably irritate your ears. There are some magnetic boards that make use of rubber material this reduces the impact of loud noise and make it easy to play.

So, in short like everything else Dartboards have also gone through extensive changes. They have continued to develop and now Darts is actually recognized as a sport. The simple game which started in the pubs is now played at international level. The manufacturers are continuously on the lookout for better materials, designs and are striving to develop a dartboard that will surpass its predecessors further. So, whether you want to pick up darts as a hobby or profession it does not matter because the world of darts welcomes everyone.